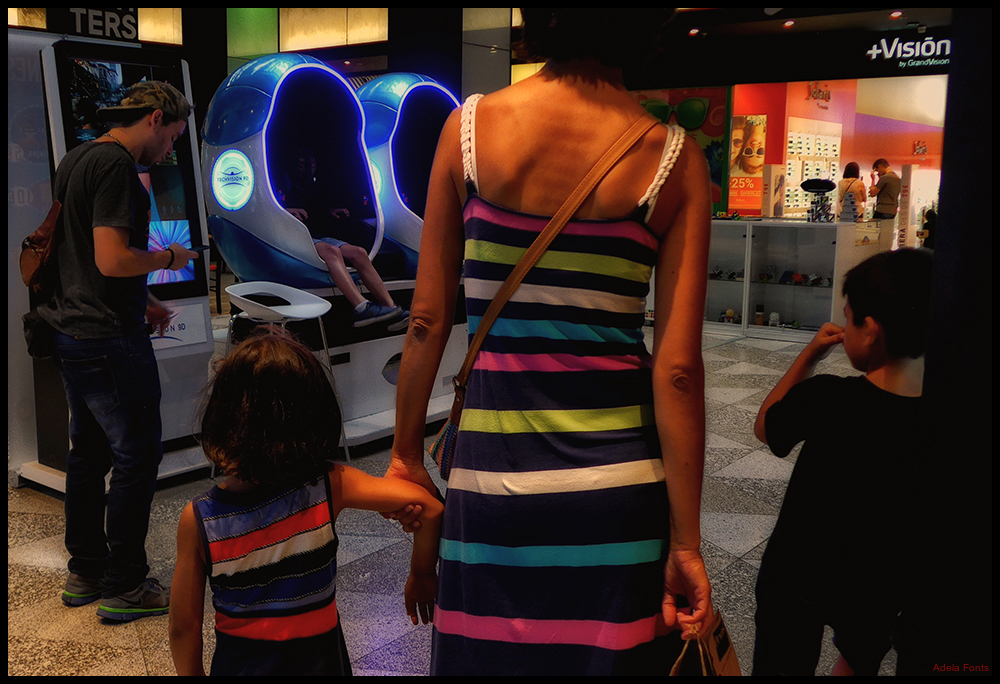 Previous Next
← previous day next day →

Posted by Adela Fonts (Barcelona, Spain) on 21 February 2018 in Lifestyle & Culture and Portfolio.

I am very glad to be in Aminus3... thanks for visiting my photoblog... and express your opinion!

I like the colorful stripes in this splendid street image.

@Michael Skorulski: Glad you like it! Thanks a lot!

What a colorful moment all this all makes . . could run a series from the one spot !

@Ronnie 2¢: I actually do it always. I have a series of photographs of this day. This caught my eye on the way the mother takes her daughter out of the arm ...! Thanks a lot!

The girl must be happy to wear the same one as her mother's !

Such a nice street photo.
A moment of daily life.

@Ehsan Hemmati: Thanks a lot!

A colorful composition captured under such warm light!!

@Steven: Thanks a lot!

COlorful and full of interest

@Ruthiebear: Thanks a lot Ruthie! HUGS

A lot of things in Your today's picture,A' ! The two "chairs",on the left side and lookin' like giant glasses,just two feet from the Vision's shop ......The legs,out from the first,as the last part of a man eaten by the hole .....And,at last,the four persons of the first plan: the little boy,on the right,as dressed same as the man on the left,as if they were father and son,and covered by a same texture to be Knowned from a same family .....The Two Girls,in a same logic,with strayed dresses,cuted in a same material for identic reasons,show to everybody their similarity ....A funny scene,with,perhaps no links between people,but opened to all imaginaries .....Well done,A' ....Hugs to You .*****

@STEED: I spent some time following the mother and her children. They expected the chairs to be free to use the magic glasses. It caught my attention the way he held his daughter. I thought he was tearing off his arm ... Thankjs a lot! Glad you like it Hugs to you dear friend...

This is truly colourful, and with so much to see!

@franz: Thanks a lot franz!

Well seen and presented. I love the "life" in these colours and this photo.

Stripes are in this year. Nice shot.

@B. Thomas: The stripes are fashionable... at least in photography!